Two players compete to either build their Tower to a height of 137 or destroy the tower of the opponent. To do this, players have to develop a strategy for playing their cards. This is a turn-based game. On every turn, a new card is placed from the Deck to the Hand of the Player. 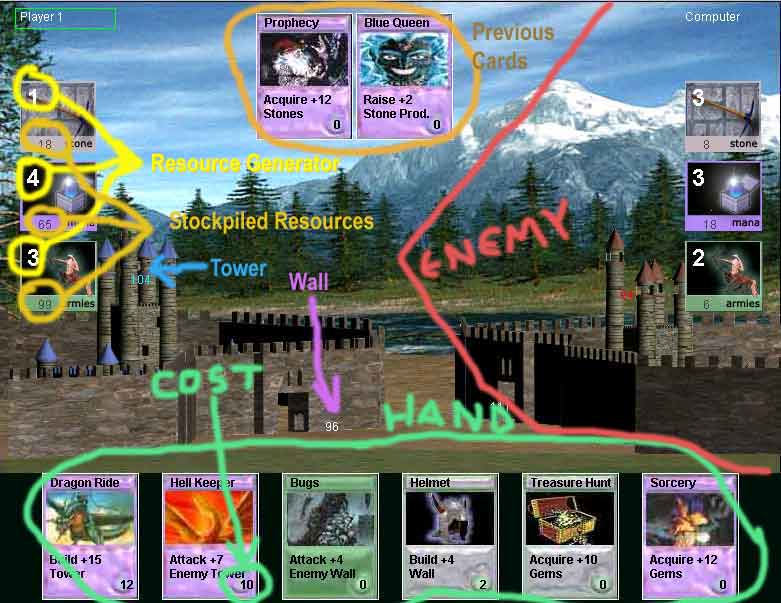 One card for every turn can be either executed or discarded. There is only one condition to execute a card; the player that executes it needs to have enough Resource to spend on it. Players accumulate three type of resources – as many as the colours of the cards:

So, for example. to execute a green card that costs 15 , the player needs to spend 15 green resources. If the player has not available resource to spend to a card, then the card is greyed-out and says “CAN’T PLAY”. That means that it can’t be executed. However the player may choose to discard the card and continue. The border of a card becomes green when it can be executed and red when it can’t and can only be discarded.
Resources. can be acquired either directly by executing cards that add to the stockpiles of the player, or indirectly on every turn, through Resource Generators. A Resource Generator generates a piece of resource on every turn. So if the player has 3 stone generators and 17 stockpiled stones, then on next turn, the stones will become 17+3 = 20.

The game contains 120 cards in total, 40 for every resource/colour. In summary, there are cards either to build or destroy:

Usually, players fight to acquire as many Resource Generators as possible, to be able to concentrate later-on either on attack or build-up.

Do you want to have a go?